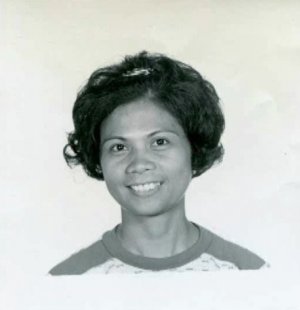 Gloria was born Sept 10, 1944 into a family of 7 sisters and 1 boy in Leyte, Philippines during World War II against Japan where General MacArthur returned in Oct 20,1944. Gloria moved to Olongapo City as a young teenager near the Subic Bay Naval Base, working in a bakery and pharmacy. She later got a job on base as a maid and nanny where she also performed Spanish folk dances with her sisters and fellow maids. On Aug 2, 1974 she married Kris Kersch. A lot of her time was spent learning the organ, crocheting, seamstress classes, and doing numerous cermanic projects she loved. While they were stationed in Japan, Gloria took cake-decorating classes and toured the island to learn the culture. When Kris out of the Navy they bought the Kersch's Donut Shop. Gloria with her great smile and warm personality would meet the customers remembering all their names and have their usual orders waiting. With her husband they made muffins, bread, wiener wraps, and pepperoni wraps plus she hand-rolled over 70,000 egg rolls (Philippine Lumpia) which she had Americanized. Over the years they made adjustments to the menu, making baked cinnamons rolls, cookies, croissants, and scones along with shop's famous crushed ice, yogurt ice cream. and nacho machine (still in use throughout the small community of 2,438 in city and 10,000 in our rural farm valley). Enjoying family, grandchildren, great grandchildren, and friends has always mean the most to her. Yerington's people loved this lady so much they were more than customers but friends. Their kids become her kids. She is survived by: her Husband Kris Kersch and children Arnel, Kasey, and Yolanda along with daughter-in-laws DeeDee and Carol. Grandchildren: Michael Carmon, Alex Carmona, Katie Kersch, Jaimee Kersch, and Anthony. Great Grandchildren: Caleb, Carson, and Ava Carmona. Our song was "If anyone should every write my life's story" sung by Steve Lawrance and "April Love" by Pat Boone. She faught to the end still doing her exercises as best she could. We tried every treatment with good theory under the sun! My belief in all those years of searching the web that it is the BMAA bacteria with maybe the SOD1 mutation. In memory of Gloria give donations to ALS research, care, and treatments of your choice. I will love Gloria for ever and the rest of my life. I feel like the Tinman!