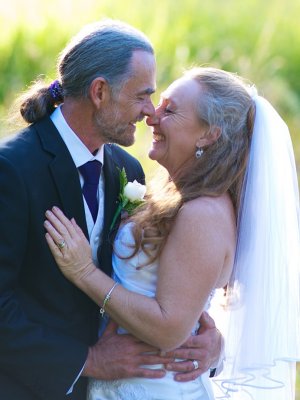 Chris Jeffery was the love of my life, and my soul mate. We did not meet until 2009 and embarked on a whirlwind fairy tale romance. His first wife had died after terminal cancer at only 41, 5 years previously. His attitude to life, love and loss totally blew me out. I was cynical about love after coming through a divorce I never wanted. This man, who could talk incessantly, laugh without a care in the world, and believed that the only thing of value you have at the end of your life is your memories of happiness, told me that he had wanted to see me again because he saw kindness in my eyes. I could never have imagined a man such as him in my wildest dreams. Yet here he was. We found our dream home/property and before we knew it, it bought us! 7 May 2010 we moved into our fairytale full time. 7 May 2011 we married in our fairytale home, and believe life could get no better. By our first wedding anniversary I knew there was something going on - his personality was changing. By the second half of 2012 he was having the odd strange swallowing problem and uncontrolable, hysterical laughter. Witin a short time he was starting to slur. 23 May 2013 he was diagnosed, without a doubt, with bulbar onset ALS. My amazing man, was taken away, body and soul, bit by bit, but so fast it was astounding. 22 April 2014 and he was gone forever. I will always remember Chris as the man who saw into my soul, and taught me what love really can be.