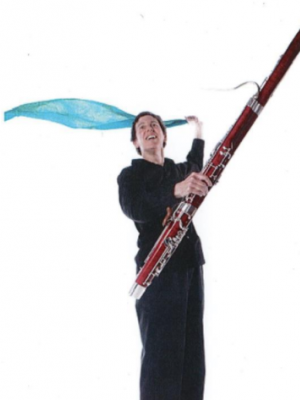 Karen moved to the Rogue Valley in 1991 and practiced rheumatology until her retirement in 2015.

Though medicine was Karen’s career, music performance was her passion. An accomplished bassoonist, Karen played with the Rogue Valley Symphony for 27 years and was principal bassoonist for the last five of those. She also played with the Ashland City Band and Jefferson Baroque Orchestra.

In 1999, Karen met her partner Wendyn Price; the two were officially married in 2015.

Karen had many interests in addition to medicine, music, and family. She was an avid bicyclist, skier, dog lover, and gardener. Karen considered herself a steward of the earth. Karen lived life to the fullest, even after contracting amyotrophic lateral sclerosis (ALS) in 2017. In fact she aspired to become an expert on ALS and became a moderator for an online ALS forum.

Karen is survived by her spouse Wendyn, her parents, brother David Basin (Switzerland), his wife and their two daughters, Wendyn’s sons, their wives, two grandchildren, beloved dog Jaime, and a large music family.