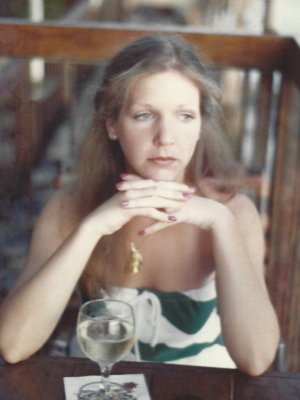 Born on December 9, 1952, at Bolling AFB in Washington, DC, she was the daughter of an Air Force Colonel and a journalist. Cynthia was raised with her sister on Air Force bases in Texas, Kansas, Maine, Mississippi, and Ohio and spent many summers on her grandmother's farm outside Marshall, Virginia. Cynthia’s family roots run deep in Virginia where her mother’s family tree has grown for hundreds of years in Northern Fauquier, Rappahannock and Frederick Counties.

After graduating S.D. Lee High School in Columbus MS, she briefly attended Mississippi State University in Starkville, but left to take a job at a local travel agency. From there Cynthia landed a career at Delta Airlines as a flight attendant and soon moved into management. After Delta she took a senior position at Presidential Airlines and then was recruited by IATA (International Air Transport Association) where she travelled the world advising dozens of national carriers in the calculation of structure pricing vis a vis passenger loads.

After a long hiatus Cynthia returned to college in 2003 and earned a degree in American History from the University of Virginia in 2007. She had always been drawn to the subject throughout her life, and after graduating, Cynthia dug deeply into her family’s heritage and genealogy. She amassed and catalogued mountains of documents and photographs in both hard bound and digital family archives, thus ensuring their preservation for subsequent generations.

Cynthia was a woman of many talents and passions. As a teenager she was a member of a water-skiing show team (the Stumpjumpers) in Mississippi. She was also a licensed pilot, an excellent horseman, world traveler, and wonderful mother. She restored at least three antebellum homes, stamping each of them with her unique sense of style and attention to detail. Her masterpiece was the Solomon DeBow Home (~1830's) in Gurley, Alabama, a magnificent two-story log house that had fallen into rack and ruin. Today, its beautifully restored exterior and magnificently appointed interior mark it as an extraordinary example of her superb skill and vision.

Cynthia was a great lover of animals (including human animals), and she supported countless animal rescues and causes over the years. She adopted dozens of homeless dogs, cats and horses. She served as Vice President of the Bucket Foundation, an animal welfare/rescue organization, and in that capacity, worked tirelessly to help abandoned and abused animals. She was also a compassionate rescuer of people, taking on the legal guardianship of two of them: a disabled cousin until his death, as well as a very sick childhood friend, whom Cynthia continued to serve as her financial and medical custodian up until the week of Cynthia's death.

Cynthia is survived by her husband, her son, two stepsons, her sister and her husband, one niece, her two beloved dogs, Snickers and Biscuit, and her three horses, Joker, Chief, and Azadonya.